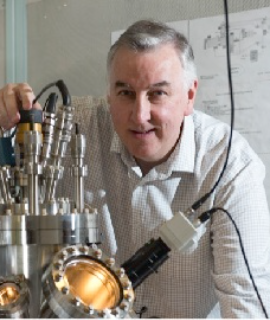 Title : Nanoparticle beam deposition: A novel route to the creation of Heterogeneous catalysts

Size-selected nanoparticles (atomic clusters) represent a new class of model systems for catalysis research. However very rarely have their structures been obtained from direct experimental measurements. The availability of aberration-corrected HAADF STEM is transforming our approach to this structure challenge. I will address the atomic structures of size-selected Au clusters, deposited onto standard carbon TEM supports from a mass-selected cluster beam source. Specific examples considered are the “magic number clusters” Au20, Au55, Au309, Au561, and Au923. The results expose, for example, the metastability of frequently observed structures, the nature of equilibrium amongst competing isomers, and the cluster surface and core melting points as a function of size. The cluster beam approach is applicable to more complex nanoparticles too, such as oxides and sulphides.
A second major challenge is to translate the beautiful physics and chemistry of clusters into applications, notably catalysis. Compared with the (powerful) colloidal route, the nanocluster beam approach involves no ligands, particles can be size selected by amass filter, and particles containing challenging combinations of metals can readily be produced. However, the cluster approach has been held back by extremely low rates of particle production, only 1 microgram per hour, sufficient for surface science studies but well below what is desirable even for research-level realistic reaction studies. In an effort to address this scale-up challenge, I will discuss the development of a new kind of nanoparticle source, the “Matrix Assembly Cluster Source” (MACS). The results suggest cluster beam yields of grams per hour may ultimately be feasible; mg scale has been demonstrated. Some practical catalysis applications, both gas and liquid phase, will be presented, showing attractive activities and especially selectivities.

Richard Palmer runs the Nanomaterials Lab in the College of Engineering of Swansea University, Wales, and is Professor in the School of Physics of Nanjing University, China. His research is currently focused on Nanoparticle Beam Deposition, including scale-up and atomic structure/dynamics with applications including catalysis, biomedicine and advanced materials for IT. At Cambridge (1980-1994) Richard was awarded an MA and PhD and held 1851, Clare College and Royal Society Fellowships. At Birmingham (1994 -2017) he founded the UK's first nanoscience centre. Awards include: IOP Boys Medal, Honorary Doctorate from Hasselt University, BVC Yarwood Medal and an EPSRC Senior Fellowship. He is a Fellow of the IOP, RSC and LSW. He has published ~400 papers with h index 53 and ~20 families of patent applications. Spin-off companies include Inanovate and Irresistible Materials. He is the Editor-in-Chief of Advances in Physics: X (Taylor and Francis) and Book Series Editor of ‘Frontiers of Nanoscience’ (Elsevier).