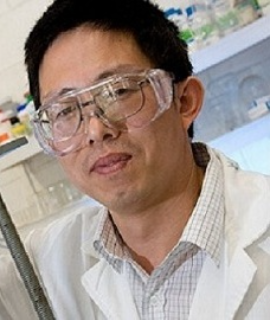 Electrochemical water splitting is an effective method for storing electrical energy in the form of H2 fuel, but hurdled by the sluggish anodic oxygen evolution reaction (OER). It is thus important to develop an efficient OER catalyst with large surface area, abundant active sites, and good stability through simple and economical method. Herein, we introduce a facile solution reduction method to prepare the iron-cobalt oxide nanosheets with a large specific surface area, ultrathin thickness (1.2 nm) and, importantly, abundant oxygen vacancies. The activity of the new catalyst was superior to those of commercial RuO2 and most of reported OER catalysts. The mechanisms for the excellent OER catalytic activity of the new catalyst will also be discussed (Advanced Materials 2017, 29 (17), 1606793).

Prof  Zhu’s research interests exist in advanced catalysis, gas/liquid adsorption and separation, direct carbon fuel cells and solid oxide fuel cells. His publications include one edited book, 8 book chapters, and over 250 journal papers. He holds 8 patents, 4 patents have been licensed to the industrial sponsor. He has raised a total research funding from government and industries in excess of $20 million. He is the recipient of a number of awards, including RK Murphy Medal 2013, Freehills Award IChemE 2011, 2nd place Innovator of the Year Award Global IChemE 2011, the University of Queensland (UQ) Foundation Research Excellence Award in 2007.