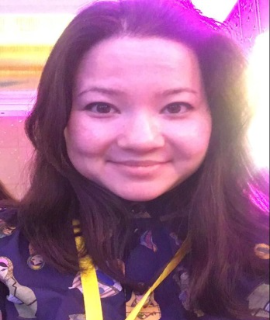 Water purification and environmental remediation has been one of critical issues arising with increasing demand for portable water. Industrial effluents, primarily synthetic colourings from textile dyes such as methylene blue contribute predominantly to water pollution. Therefore, the aim of this study was to investigate efficient degradation of methylene blue under solar light irradiation employing magnesium ferrite photocatalysts synthesised by two way sol gel technique, where target was to obtain nanoparticles with the maximum content of specified ferrites, uniform particles with high crystallinity. In the first method, MgFe2O4 nanoparticles were synthesized by co-precipitation of magnesium and iron hydroxides, whereas second sol-gel method is based on magnesium acetate and iron nitrate precursors. For both methods annealing was performed at 400-600ºC for growth of magnetic nanoparticles. Structure and morphology of MgFe2O4 nanoparticles were characterized by XRD and SEM. According to XRD pattern, 100% spinel ferrite with crystallinity of 77.6% has been achieved at pH=7.0 and showed most uniform particle size distribution with crystallite size of 10-50 nm. Nanoparticles obtained using second method showed phase content of Fe2O3 23.8% and MgFe2O4 76.2% with crystallinity of 74.3%. The photocatalytic experiments performed under solar light irradiation showed, total degradation of MB with MgFe2O4 obtained from first method in 2 hours and 15 min at concentration 0.4 g/L of photocatalyst. It is one of the promising photocatalysts for waste water treatment.

Gulzat Demeuova is a junior researcher in Laboratory of Materials Processing and Applied Physics at Center for Energy and Advanced Materials Science founded at Nazarbayev University.  She received her MSc in Chemical Engineering from University of Leeds, UK and BSc in Chemical Engineering from University of Bath, UK in 2014 and 2010 respectively.  Her research background orients from cyanide leaching of gold, hydrophobic materials, photocatalysis for water treatment and GaN thin films. Results of her work are formed in patent and publications in international and local journals.