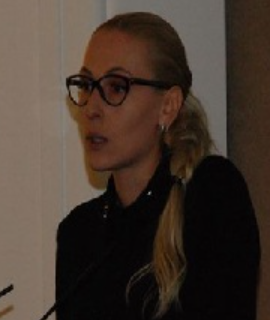 Recently, the catalytic methanol decomposition process is considered as the simplest way for syngas production. The development of active and low-cost catalysts for methanol decomposition forced their usage in nanoscale by deposition on suitable, generally porous supports. Activated carbon (AC) can be used for this purpose due to its high surface area, porous structure, specific surface reactivity and possibility to be derived from renewable and waste materials, such as biomass and various organic residues. In our previous study we demonstrated that activated carbon from biomass wastes are appropriate catalyst supports for spinel ferrites. The effect of texture and surface characteristics of the activated carbon host matrix, prepared from different biomass precursors, such as grape seeds, peach and apricot stones, was study and compared with mesoporous silica type KIT-6. This study is aimed at the investigation of possibility to use activated carbon from used motor oil, as a host matrix for nanosized zinc ferrite nanoparticles. The attention was focused on the role of texture and surface characteristics of carbon support on the regulation of the state of active phase. For the purpose, series of AC with tunable characteristics, which were achieved by some specific post synthesis treatments and by using used motor oil as a precursor and various wastes additives such as coal tar pitch and polymers, were used as host matrix for zinc ferrite nanoparticles. A simple wetness impregnation technique ACs supports modification was applied. The catalytic behaviour of the obtained metal oxide composites was tested in methanol decomposition in view of its potential application as intelligent carrier of hydrogen. The effect of carbon support on the formation and state of zinc ferrite phase will be followed in detail.

Izabela Genova is an Assist. Prof. in Institute of Organic Chemistry with Centre of Phytochemistry, Bulgarian Academy of Science, lab.” Organic Reactions on Microporous Materials”. The results of her work are formed in 27 publications, 23 of which in scientific journals with an impact factor. She has participated in 41 international scientific conferences with oral and poster presentations.